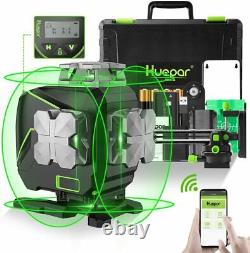 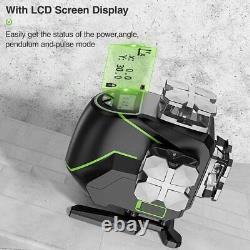 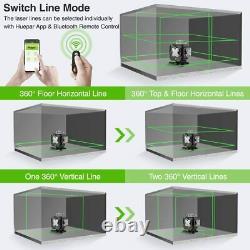 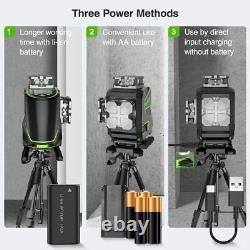 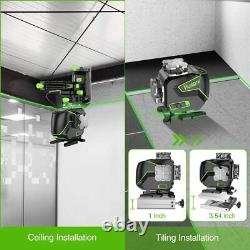 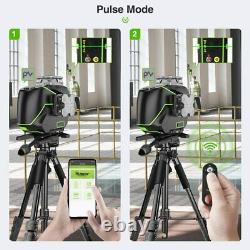 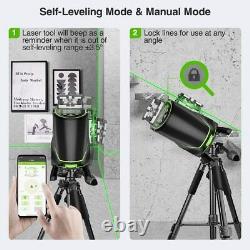 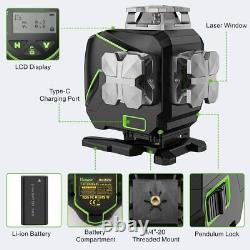 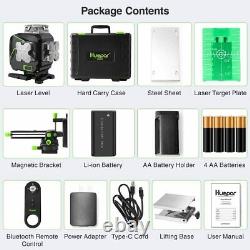 With the lifting base, the 360° floor laser can raise from the surface to project over and travel past uneven surfaces or obstructions between 1" and 3.54" height. Two 360° vertical lines cross at 90°angles makes user quickly visualize and finish square layout. LCD DISPLAY&BLUETOOTH TECH: The laser level has LCD screen to easily get the status of the battery, angle, pendulum and pulse mode on the display.

The App and remote control can switch ON/OFF the laser lines and pulse mode, select the laser planes. Huepar App also provides out-of-level alarm. The laser tool can connect two Bluetooth devices simultaneously. Besides, this 4D laser level can be used at job site by plugged in when take out the battery.

With Type-C charging port, the 16 lines laser level can also be charged by laptop, power bank, car charger, etc. MULTIFUNCTIONAL LASER TOOL: The four 360° laser planes can be selected individually by separate H and V button on the keypad. With smart pendulum, the laser tool self levels and indicates out-of-level condition while pendulum unlocked. The line laser will beep when out of self-leveling range ±3.5°. Once pendulum locked, it switches to manual mode to lock lines for use at any angle.

1 x Hard Carry Case. Lines Switching & Bluetooth Technology. Short press the "H" and "V" buttons on the keypad to switch the Horizontal and Vertical laser lines separately. The Bluetooth remote control / Huepar APP enables to select four 360° laser lines individually at a distance up to 98Ft. The laser line(s) can be temporarily turned OFF by the remote control/Huepar APP when need to leave for a while.

When connecting with Huepar APP and the Bluetooth Remote Control, the pulse mode can be switched ON/OFF via APP and remote control. Pulse mode extends the working range up to 200Ft in brighter working conditions when using with Huepar Line Laser Receiver. It is compatible with Huepar LR-6RG / LR-5RG Laser Detector only.

Note: Keep the pulse mode on when using with a receiver. Once the pendulum unlocked, the self-leveling mode is enabled.

The laser beam will beep as well as the laser beam blink fast when the tool is out of self-leveling range ±3.5°. With Bluetooth Tech, the locked icon will be displayed on Huepar APP and LCD screen.

When the pendulum is in the locked position, the laser tool can be placed for use at any angle. The laser beam will blink every 3-5 seconds to remind you it's not self-leveling now. With Bluetooth Tech, the locked icon will be.

This laser tool utilizes the included large capacity Li-ion battery which is compatible with Samsung SB-L110 battery. Huepar 360 laser level also comes with a holder for installing 4 AA batteries to use the tool. The 16 lines laser level can be used at the work site by plugged in directly when taking out the battery.

The four fine-tuning knobs on the bracket enable adjustment of the left and right position, front and back position within 4.8 in (12cm) and the vertical angle against the wall. The laser tool comes with the 1/4-20 mount thread to suit a standard tripod or pole mount.

The item "4D Cross Line Laser Level Self-Leveling Laser with LCD Screen Remote Control" is in sale since Friday, November 26, 2021. This item is in the category "Home & Garden\Tools & Workshop Equipment\Measuring & Layout Tools\Laser Measuring Tools". The seller is "huepar_tool" and is located in Hebron, Kentucky. This item can be shipped to United States.